What exactly is a sprinkler system?

A fire sprinkler system is an integrated system of underground and overhead piping designed in accordance with fire protection engineering standards. The installation includes one or more automatic water supplies. The portion of the sprinkler system above ground is a network of specially sized or designed piping installed in a building, structure, or area, generally overhead, and to which sprinklers are attached in a systematic pattern. The valve controlling each system riser is located in the system riser or its supply piping. Each sprinkler system riser includes a device for actuating an alarm when the system is in operation. The system is usually activated by heat from a fire and discharges water over the fire area.

Why do I need a sprinkler system?

Simply put, fire sprinklers save lives. They go to work immediately and keep a fire small, thereby reducing the danger of intense heat and smoke trapping a building's occupants. Aside from fire fighting and explosion fatalities, there has never been a multiple loss of life in a fully automated building. By restricting the area exposed to fire, there is also a reduction in the amount of property loss.

How do sprinkler systems operate?

Automatic fire sprinklers are activated by heat and tied into a network of pipes with water under pressure. When the heat of a fire raises the sprinkler temperature to its operating point (usually 165∞ F) a solder link will melt or a liquid-filled glass bulb will shatter to open that single sprinkler, releasing water directly over the source of the fire. Because they operate automatically, fire sprinklers prevent a fire from growing, while sounding an alarm. It is the ability of the sprinkler systems to control or extinguish fires in their early stages that makes them such a critical tool in fire protection strategy.  Reports of water damage from sprinklers are often exaggerated. The amount of water needed to douse an unsprinklered building fire is usually tens to hundreds of times more than that which sprinklers would have discharged. Fire damage is also many times greater.

What kind of sprinkler system do I need?

There are many, many different kinds of sprinkler systems. At Patriot Fire, we understand the various needs and requirements for our clients, and are well equipped to assess and design the appropriate sprinkler system for each and every individual client. 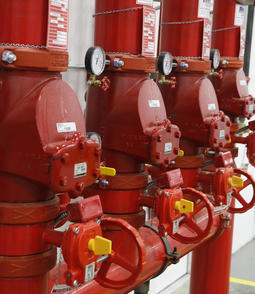 Sprinkler systems are vital to safety and protection.